MassiveTraits is a unique plugin available only on MassiveCraft. It allows you to customize your character by adding traits of your choice that suit your play style. There are over a billion possible character builds.

You have 150 trait points and 10 trait slots to spend.

Each trait occupies 1 slot, meaning you can have 10 different traits. The traits do however have different point values. There are both positive and negative traits. By adding a negative trait you gain some extra points at the cost of giving your character a weakness.

Negative traits are the only ways to get more points.

Note: You can use /t instead of /trait.

Hover your mouse over each trait for detailed information.

The Unholy trait represents the temptation and power of the dark side. Picking this trait is an easy way to get some extra points without any immediate negative effects.

The Holy trait is however a very strong counter to the Unholy trait. The Holy deal +50% damage and take -50% damage from the Unholy. On top of that the Holy can craft holy water (just put a bottle of water into a workbench).

Holy water is a special splash potion with a radius of 10 blocks. When someone Unholy is affected by holy water their health and food immediately drops to 50% of the current value. Holy water can also be used as a way of detecting who is Holy and Unholy. The Holy emit white smoke and the Unholy emit dark smoke when affected by holy water.

These traits modify damage dealt and taken for the the weapon types Archery, Sword, Axe and Unarmed.

These traits will grant you a permanent (potion) effect. Absorption refreshes every 30 seconds.

FireBall is activated using either “/trait use fireball” or left clicking while holding a fire charge. It consumes one fire charge on use and has a 2 second cooldown. Those within 5.0 blocks of the impact point are ignited for 10 seconds and take 10.0 hearts of instant fire damage. Does not set blocks on fire.

Note: If you add Nonivore you will need to add StoneEater or one of the passive feed traits below.

These traits will slowly modify your health or food level during certain conditions.

With a truce trait you will not be attacked by those hostile mobs unless you attack first. If you attack the truce is broken for 30 seconds. 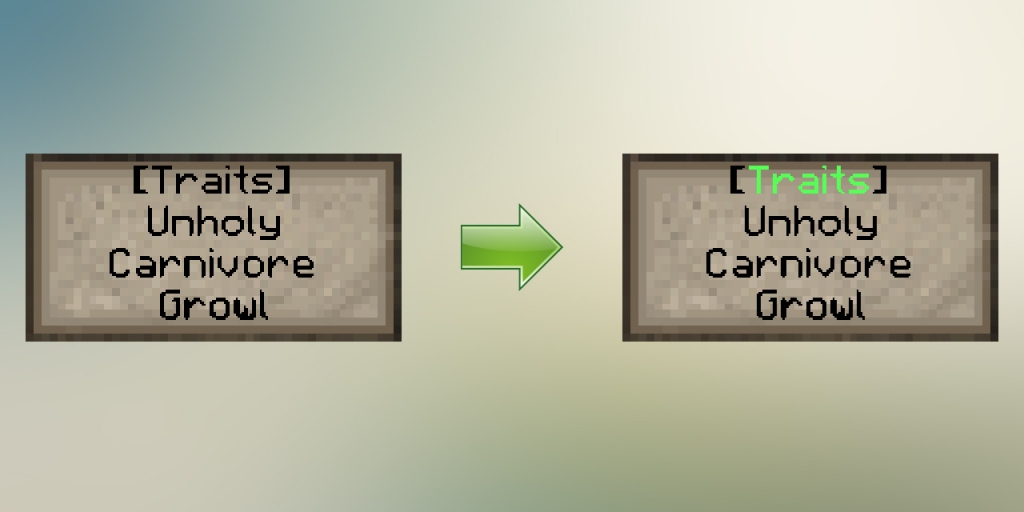 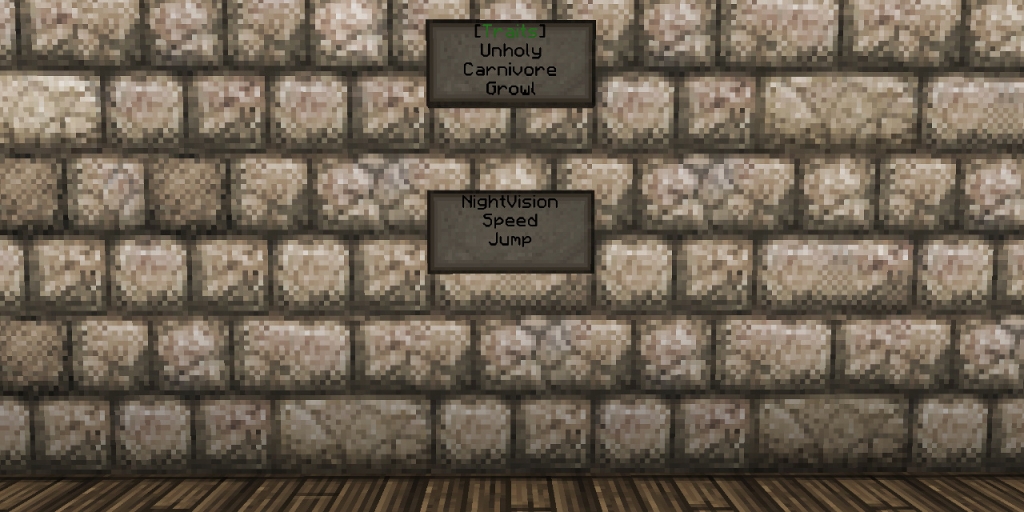 The special [Traits] sign is used for trait build presets. Right click the sign to set the traits. Right clicking the example above would be the same thing as running “/t set Unholy Carnivore Growl NightVision Speed Jump”.

Anyone can create a [Traits] sign. If you do it right the text at the top between the square brackets will turn green. You can add extra signs below with more traits.